MADAME MAYHEM who is currently on tour supporting her new record, ‘Now You Know,’ Made a stop at Syracuse’s famed Lost Horizon this past Monday evening.

Her Current release, “Now You Know” features a powerhouse all-star team consisting of some of rock’s most talented musicians, including Billy Sheehan (Mr. Big), who not only produced the album but played on it as well, Ray Luzier (KoRn), Ron “Bumblefoot” Thal (ex-Guns N’ Roses), Russ Parrish (aka “Satchel” from Steel Panther), and Corey Lowery (Saint Asonia, Stuck Mojo, Eye Empire).

Madame Mayhem who is the direct support on the current Mushroom Head tour is definitely a must to check out. Mayhem and the band delivered their set list with an in your face attitude with no shortage of NYC style swagger. Their set had many notable songs including her newest single “Left For Dead” which delivers a melodic yet intense punch to the gut. I will be hard to forget their performance of “Monster” especially if you are a fan of bands like Lacuna Coil and Evanescence.  After a dominant 30 minute set one can easily say that Madame Mayhem made some new fans in Syracuse.

Prior to the show I had the opportunity to sit down with Madame Mayhem. Despite the terrifying spiked gloves she had on, she was very laid back and easy to talk to. It was a pleasure chatting with her about the video for “Left For dead”, her musical influences and what she likes most about touring.

Hope you enjoy the interview and the photo gallery! 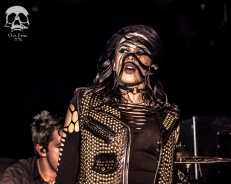 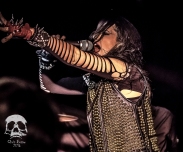