In the midst of the hot August sun, there were a number of events happening in Syracuse. The New York State Fair was well into its 4th day and Hank Williams, Jr. was performing at the Grandstand. Just a few miles from the Fairgrounds at the St. Clare Annex, Syracuse’s own GhostxShip was getting ready to perform their final show. GhostxShip announced this past spring that they would be parting ways to pursue other projects. However, they promised their die-hard fans that they would have one hell of a memorable finale show.

GhostxShip’s, Keith Allen, Sean Mott, Chris Smith, Kyle Howe and Matt Travers kept their promise by pulling together a day-long celebration of music that included 13 bands, pool toys, dodge balls, air guitars and more hardcore riffs than you could shake a fist at.

Some of the days highlight included the band Caverns who kicked off the day’s festivities with a very intense set of music that included an awesome cover of “Caboose” by Snapcase. If you haven’t heard their version, check it out on YouTube. If you missed the performance by Brick by Brick from Albany, NY, then I feel sorry for you. They delivered an astounding set of powerful, blow you away hardcore songs. The band As This Body I Exist, was also celebrating their final performance together. They definitely went out kicking and screaming and leaving the audience wanting more. I would be remiss not to mention one of the fan favorites, the madcap marauders from Syracuse, NY, 40 Dead Men. They delighted the audience with their ultra-violent, “droogy style” performance. 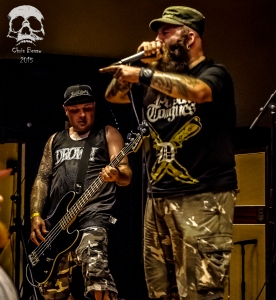 A single light shines on the stage; the crowd is getting anxious as one by one the members of GhostxShip take the stage. Lead singer, Keith Allen, pauses for just a moment to express his gratitude to the fans who came out to their farewell performance, the feedback rings through the amps and the band explodes into “Burden to Bear” off their final album “Cold Water Army.”
The party begins: The fans erupt into a whirlwind of bodies everywhere, inflatable pool toys fly in the air, air guitars are blazing and watch out for the dodge balls. It’s all good fun. The fans make sure they take care of each other even in the midst of the chaos. 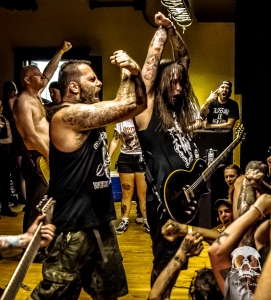 “I will forever be in awe, amazed to no end. At the hearts and minds, of all my friends.”
GhostxShip takes a moment between each song to express their undying thanks to the fans for all of their support. They also take the time to thank each other. It is a very emotional and intense set. The band acknowledged two “super fans” who traveled all over to support the band and were there for them since they started in 2009. They honored them by inviting them on stage to help sing their favorites song, “Cold Truth.” 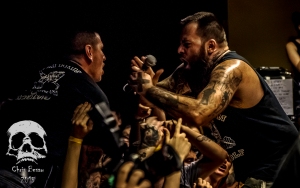 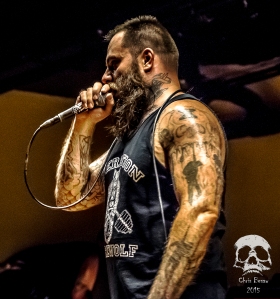 “Providence has brought us together, An eclectic family like none other. Welcome all sisters and brothers, the bonds we share bind us forever.”
The set culminated with all of the fans piling on stage to help wish the band members well and close the evening in style with everyone singing along to the “Here and Now.” The evening ended with a barrage of bear hugs and well wishes. This true sense of camaraderie is why I love Syracuse Hardcore! The feeling can best be summed up by “These are the Moments We Live For.” Thank you GhostxShip for a phenomenal show and for giving us “moments to live for.” 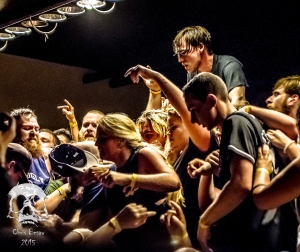 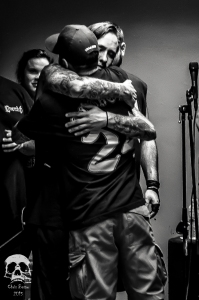