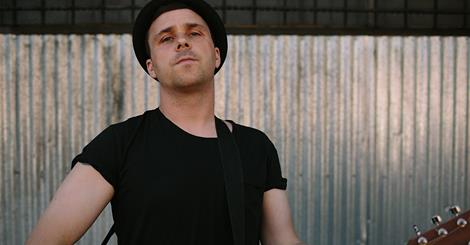 Los Angeles-based, Boston-bred folk-punk troubadour Bryan McPherson is set to release his third album, the dynamic Wedgewood via O.F.D. Records on June 10th. He kicks off the U.S. headlining leg on June 11th and will be making a stop in Syracuse, NY on Friday June 19th.

Melding Americana, folk, alternative, and punk into one incendiary, incisive sound, Bryan pays homage to influences such as Bob Dylan, The Sex Pistols, The Violent Femmes, Bruce Springsteen and Ani DiFranco. He self-produced Wedgewood at Flying Whale Studios in the secluded foothills of the Sierra Nevada mountains of Northern California. The record boasts unforgettable hooks, soaring melodies and powerful stories.

Wedgewood springs to life with the first single “Born On A Highway” that rolls along on stark yet lush instrumentation mixed with Bryan’s potent cadence. “Here We Go” is a call-to-action with its sharp lyrics and vibrant instrumentation, while “Hearts in Boxcars” depicts a strained love story of two people who must go in different directions. The expansive “Song From The Moon” illuminates the breadth of Wedgewood with its revolutionary characters and spirit.

Touring year-round, Bryan has hit the road many times with punk luminaries Dropkick Murphys, he’s opened for the legendary Chuck Berry.He’s received much critical acclaim, with the San Francisco Bay Guardian praising, “His words aren’t just cerebral ponderings about the state of the government. It is one man belting—at the top of his lungs—his honest, emotional impressions of the world.”

All Ages Show
Doors at 8pm